Christy Thornton is an Assistant Professor in the Johns Hopkins University 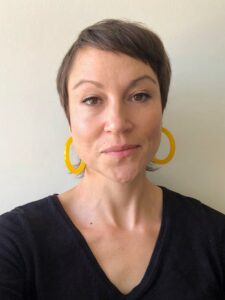 Department of Sociology and Program in Latin American Studies, and a core faculty member for the Latin America in a Globalizing World Initiative. She is also the co-director of the History and Political Economy Project. She is currently a Fellow at the Quincy Institute for Responsible Statecraft, and during 2017-2018, was a Fellow at Harvard University’s Weatherhead Initiative on Global History. She received her PhD from NYU in 2015, and taught in History and International Studies at Rowan University before coming to Hopkins. Her research interests are interdisciplinary, and include the history of development and international institutions, labor and social movements, Latin American political economy, Mexican state formation, and the transnational war(s) on drugs.

Christy holds a Bachelor’s degree from Barnard College, which she attended as a Pell Grant student, as well as a Master’s of International Affairs from Columbia University, which was supported by a Truman Scholarship.

Before graduate school, she was for five years the Executive Director of the North American Congress on Latin America (NACLA), a 50-year old research and advocacy organization working on Latin American affairs and the U.S. relationship with the region, and she is currently a member of the Board of Directors there.

In addition to her scholarly work, she makes frequent media appearances and writes for popular publications such as The Washington Post, The New York Times’ “Room for Debate,”  Al Jazeera, The Nation, and Jacobin. She is also a radio producer and host.

Christy’s first book, Revolution in Development: Mexico and the Governance of the Global Economy, was published in January 2021 by the University of California Press. It was selected a Best Scholarly Book of 2021 by the Chronicle of Higher Education and and is the winner of the 2022 Luciano Tomassini Latin American International Relations Book Award from the Latin American Studies Association (LASA).  It also received an honorable mention for the 2022 Immanuel Wallerstein Memorial Book Award from the American Sociological Association’s Political Economy of the World System (PEWS) section, as well as an honorable mention for the 2022 Barrington Moore Book Award from the Comparative and Historical Sociology section.

Revolution in Development uncovers the surprising influence of post-revolutionary Mexico on the twentieth century’s most important international economic institutions. Drawing on extensive archival research in Mexico, the United States, and Great Britain, Revolution in Development meticulously traces how Mexican officials repeatedly rallied Third World leaders to campaign for representation in global organizations and redistribution through multilateral institutions, from the 1920s through the 1970s. By decentering the United States and Europe in the history of global economic governance, Revolution in Development shows how Mexican economists, diplomats, and politicians fought for more than five decades to reform the rules and institutions of the global capitalist economy. In so doing, the book demonstrates, Mexican officials shaped not only their own domestic economic prospects, they shaped the contours of the project of international development itself.

Additional research and publications can be found on her CV.